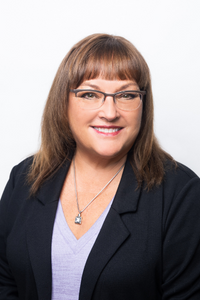 Terri Pelton was appointed as Alberta’s Child and Youth Advocate on April 1, 2022. Terri has worked in the social services sector for over 30 years, helping to create positive outcomes for young people, their families, and their communities. She first joined the Office of the Child and Youth Advocate in 2007 and played a leading role in developing the Investigations and Legal Representation for Children and Youth (LRCY) programs.

At the beginning of her career, Terri served as a frontline child protection worker and supervisor, and later worked for the Ministry of Children’s Services as an analyst. Through these early experiences, she saw firsthand the challenges young people in government systems encounter and became a strong advocate for meaningful change.

Terri holds a Bachelor of Social Work from the University of Regina and completed the Senior and Executive Management Development Program for the Alberta Public Service. Terri is guided by her belief that young people’s rights must be upheld, and their voices heard when decisions are made that affect them.